The evolution and conservation of lncRNA sequences has been a topic of intense study and debate since the vast numbers of lncRNA transcripts were discovered (3,6). Determining if lncRNAs as a group are conserved and evolve over time is important because it  would provide evidence that they are functionally important to organisms and not merely the product of transcriptional noise.

The function of lncRNAs have been questioned ever since their discovery through cDNA library sequencing and microarray tiling arrays. Both these techniques quantify the presence of these transcripts, but do not provide any information about their activities in the cell. Because of this uncertainty, one hypothesis for the existence of lncRNA is transcriptional “noise” due to low fidelity binding of RNA polymerase to randomly occurring weak promoter sequences in the genome (R1,R2,R3). This hypothesis implies that it is more energy efficient for the cell to allow some random transcription to occur than it would be to downregulate nonspecific RNA polymerase binding and transcription. One piece of evidence for this hypothesis is that although the quantity of individual lncRNA transcripts is much greater than mRNA transcripts, individual lncRNA transcripts are transcribed at much lower levels than individual mRNAs (7).

Another piece of evidence that may support the transcriptional noise hypothesis is the generally low conservation of lncRNA sequences between species (R2,6). There have been many studies that have calculated the rates of sequence change in lncRNAs over time. The general strategy used to calculate these rates is to compare the number of nucleotide changes in the sequence in question to the number of changes in sequences  of the same size that are under not under selective pressure, such as transposable elements (R3). Although the results of the studies vary depending on which lncRNA sequences are studied and the sequences that are used as controls, a recent study that screened for lncRNAs with relatively high degrees of sequence conservation identified a group of ~3000 lncRNAs (8). However, it is important to note that even this group of lncRNAs had very low sequence conservation as compared to protein coding genes; when the transposable element control group was normalized to a 100% sequence change rate, protein coding genes were calculated to have a 10% change rate, whereas lncRNA sequences had a 95% change rate. Nevertheless, studies such as this one mayidentify lncRNAs that have a higher probability of functional importance as subjects for further study.

Rapid evolution of lncRNA sequences has also been hypothesized to be a reason for the low level of lncRNA sequence conservation. Due to the flexible relationship between lncRNA sequence and function, lncRNAs may be more plastic and thus more amenable to evolutionary change than protein coding genes. As the list of organisms with fully sequenced genomes has grown a striking pattern has emerged. Although the numbers of genes do not increase with organism complexity as it was originally assumed they would, the numbers of lncRNAs increase dramatically (5,4). This correlation between lncRNA expansion and organism complexity is very suggestive and implies lncRNAs may be an important factor in evolutionary development. On a shorter evolutionary time scale, it has been shown that changes in lncRNA sequences constitute half of all the genetic differences between the human and chimpanzee genomes (10). However, it has yet to be determined if these changes are causative of the differences between humans and chimpanzees or if they are the result of genetic drift. 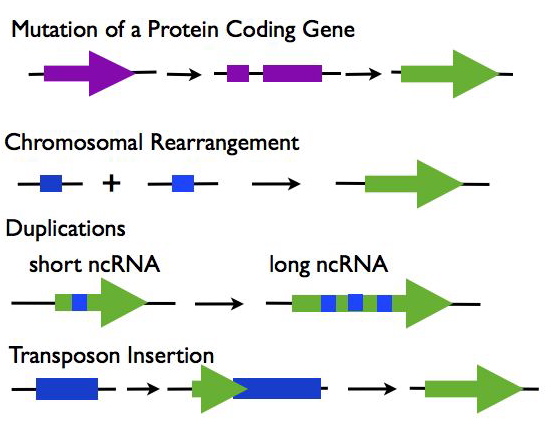 The Fantom3 Database is a functional annotation of the mammalian transcriptome. Fantom3

LncRNAs are a heterogenous group of transcripts with no defined set of parter RNAs or proteins, please refer to the Mechanism of Action section above for some examples of lncRNA interactions with partner molecules.

LncRNAs are a heterogenous group of molecules that regulate gene expression in many ways (R2,R3). 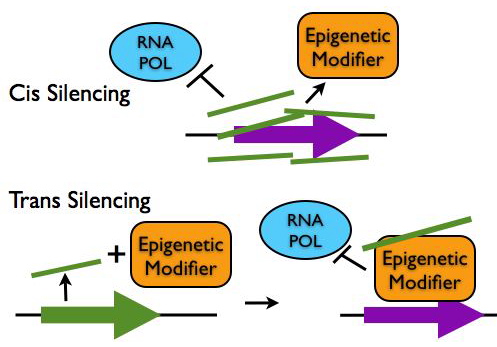 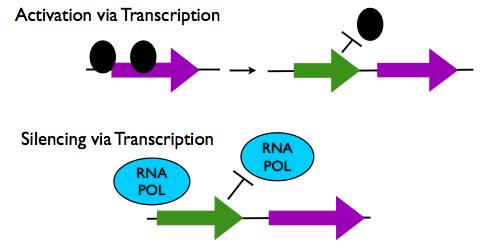 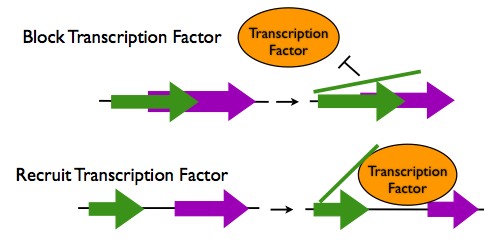 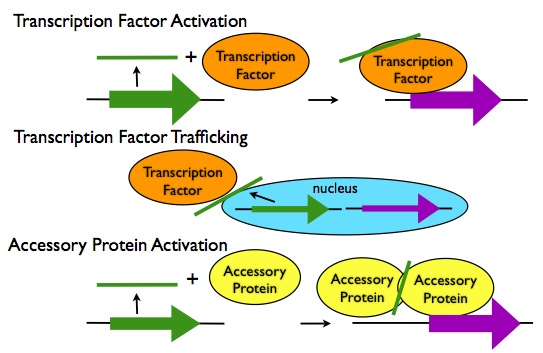 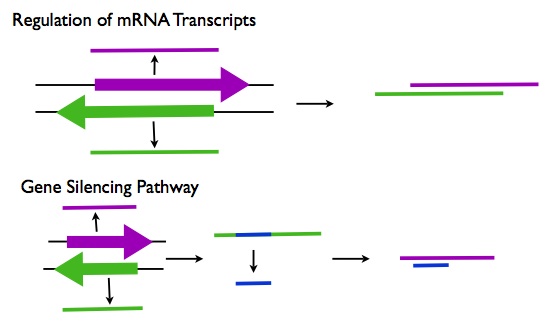 Although many lncRNAs are known to be transcribed, very few of these have experimentally-defined functions. However, based on the lncRNAs that have been analyzed thus far, lncRNAs appear to be able to regulate gene expression through a diverse group of mechanisms.

Regulation of Expression
The question of whether lncRNA is functional has led to careful study of its expression patterns, to determine whether or not they are regulated. If lncRNA transcription is due to random transcriptional noise, the expression levels of lncRNA transcripts would not be expected to vary spacially, temporally, or in response to stimuli (R2,R3). However, differences have been observed in the expression levels lncRNAs between tissue types (10). Some lncRNAs also show very precise expression patterns in tissues. For example, Mercer et al observed patterning of lncRNA expression in the mouse brain both in the tissue as a whole as well as subcellular locations (11). Expression of some lncRNAs has also been demonstrated to be developmentally regulated (12).

Location in Genome
LncRNAs can be categorized according to their proximity to protein coding genes in the genome, using this criteria lncRNAs are generally placed into five categories; sense, antisense, bidirectional, intronic, and intergenic (R2, R3). 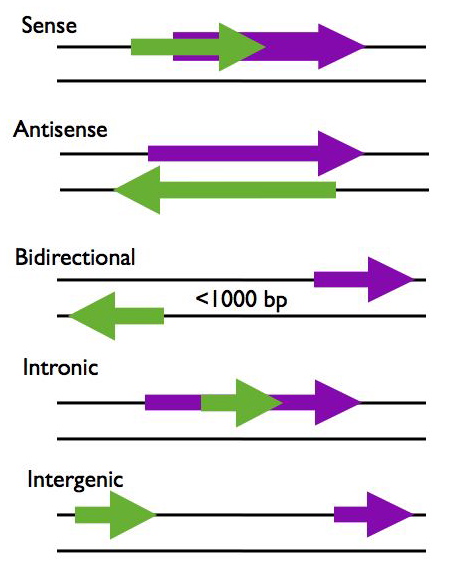 Post Transcription Forms
It is possible that many lncRNA transcripts are not end products, but are further processed into a final functional form. The presence of sense lncRNAs which contain exons from mRNA sequences and intronic lncRNA that are derived entirely from the intronic sequence of mRNAs has lead to the hypothesis that many lncRNA transcripts are unprocessed pre mRNAs that will be spliced to establish their open reading frames and that intronic lncRNAs are byproducts of this splicing (R1,R2,R3). However, this is not the case for all sense and intronic lncRNAs because the expression patterns of some of these transcripts are not the same as their associated protein coding gene, instead there are many examples that have independent expression patterns (11). Another hypothesis suggests that some lncRNA sequences are precursors to short ncRNAs that have defined regulatory functions such as microRNAs.An example of this is the lncRNA H19 which contains the exon that encodes the microRNA miR-675 (R3). Based on this evidence, post-transcriptional processing may occur with many lncRNA transcripts, but until more lncRNAs are functionally defined we will not know what proportions of them are precursors or independently functioning molecules.

Some well known example members of this class of RNA are Xist/Tsix, H19, HOTAIR, and Air.

Potential as a Tool

Introduction
Long noncoding RNAs (lncRNA) are transcribed RNA molecules greater than 200 nucleotides in length. The existence of individual lncRNAs such as H19 and Xist has been known since the 1980s; these lncRNAs were discovered using traditional gene mapping approaches and were only discovered to be non protein-coding after their RNA sequences were analyzed (1,2). LncRNAs were generally considered to be anomalies until the advent of technologies that were capable of unbiased high throughput sequencing of all the expressed transcripts in cells. The extent of lncRNA transcription was first revealed in a study using large-scale sequencing of cDNA libraries in the mouse (3). This study by Okazaki et al determined that a large proportion of the mammalian transcriptome does not code for proteins and defined lncRNAs as a significant class of transcripts. The more recent development of sensitive tiling microarrays has only increased the numbers of known lncRNAs, currently it is known that lncRNA transcripts far exceed the number of protein coding mRNAs in the mammalian transcriptome (4). For example, the mouse transcriptome was recently calculated to contain approximately 180,000 transcripts organized into 44,000 transcription clusters however only approximately 20,000 of these transcripts are thought to be protein coding genes (4,5).

Protein genes vs RNA genes: Numbers and Implications
Since the completion of the Human Genome Project our perception of our genome has undergone a dramatic shift. The number of protein coding genes in our genome has been revised downward multiple times, whereas the number of known non protein coding transcripts has increased exponentially over the past decade (4,5). Our improved understanding of the content of the mammalian transcriptome has raised questions about the the classical definition of a “gene” as a genetic sequence that codes for protein and has enormous implications for future genetics research.

Future Studies
LncRNA has been described as part of the “dark matter of the genome”, due to the fact that although we are now able to detect its presence, its function and activity remains poorly understood. Whether or not lncRNA transcription is functionally significant remains a fundamental question in this field of study and future studies of lncRNA are needed to fully understand its role in our genome.

In addition to the general alterations in lncRNA expression profiles in cancer states, specific lncRNAs have also been shown to be involved in a variety of human diseases (R2,R3). Some examples are described below.

Alpha-Thalassaemia
An inherited form of alpha-thalassaemia is caused by the translocation of of an antisense lncRNA to a location near the alpha-globin gene (HBA2). The translocation and induction of expression of this lncRNA results in the epigenetic silencing of the HBA2 gene and results in this form of human anemia (15).

Human Spinocerebellar Ataxia Type 8 (SCA8)
Patients with SCA8 have been shown to have a trinucleotide expansion in an lncRNA named ataxin 8 opposite strand (ATXN8OS) which is antisense to the KLHL1 gene. The involvement of this mutation in SCA8 disease progression has been confirmed in a transgenic mouse model. Transgenic mice with this repeat expansion show a similar progressive neurological phenotype to humans with SCA8 (17).

Myotonic Dystrophies
Repeat expansions in lncRNAs are also involved in multiple organ system myotonic dystrophies. These expansions in lncRNA sequences are predicted to alter the lncRNA secondary structures such that they prevent splicing regulators from interacting normally with pre-mRNAs (18).

© 2021 The Regents of The University of California